Michael Tintiuc's 3 most memorable facts about this shoot in London

#1  It was my second trip to winter London and this story was a part of series of shoots there. I can say exactly that the best part was the fact that instead of spending much useless time on castings I had a very well-planned schedule of confirmed shootings for everyday. In contrast to other " standard shoots " I had before this one took place in a large and professional studio.

#2  « Wild Boy » was one of the first editorials for a big magazine for witch the stylist used LIRFONS clothes and accessories from the " People are Strange " collection and mixed them with other pieces from UK designers. So for the first time I got a new experience of posing in clothes I designed together with the LIRFONS team for a magazine editorial.

#3  Later this story was published in Vanity teen magazine accompanied by an interview with me, at that time only a 20 years old teenager. The Fashionisto review said : “ Defining his style as 70’s psychedelic rock and ultimately a dreamer, Michael opens up about a world where his art brings him happiness, whether it is in designing clothes or creating music. ”
Full version of the interview and my thoughts at that time can read below.

#1  Was the world of modeling a coincidence in your life or you really looked for it?
Well, I don't believe in coincidence, I think that your thoughts and deeds in the present will be your life in the future. To be honest I wasn't sure that I would do any good in modeling, but with my girlfriend's help and support I decided to give it a try. So soon after that I left Moldova and took the train to Moscow, where I started my career.

#2  Do you see the world of fashion as frivolous?
I wouldn’t go that far, but back in the day people where following the trends that fashion had set and not the other way around. It’s obvious that the masses are not obsessed about models and fashion in general as they were 10 or 20 years ago, but it’s just because the designers are lost and don’t know what to do. The industry is desperately in need of something new, something that would stay for good.

#3  If you could do what you really like in life, would you leave the world of fashion ?
I don’t think so, I enjoy being a model, traveling around the world, being influenced and inspired as a musician by different cultures and cities. Plus I love the process of designing clothes, shoes and accessories for LIRFONS, the label I am a part of.

#4  Any photographic work which you are proud of ?
My favorite photo is the one shot by LIRFONS where I am sitting in the grass playing my acoustic guitar. It’s hard for me to describe it, but it’s not just a picture of me, the photo shows my soul, feelings and thoughts that I had at that very moment. 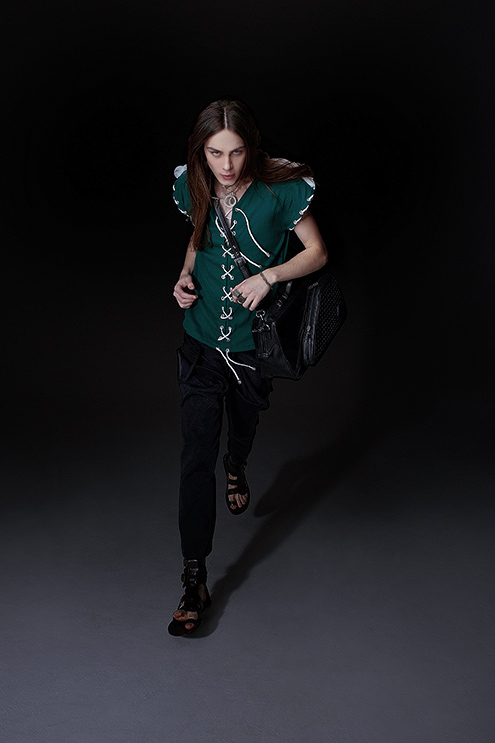 #5  What does LIRFONS mean for you ?
For me it’s more than a label, it’s a way of thinking, comprehending reality, it’s my life, it’s my child.

#6  Would you like to design clothes ?
I already am, LIRFONS  is the label I am a part of. I have to say that it’s such a thrilling experience, when you your idea drawn on paper becomes real, when you see your own creation on the pages of a magazine.

#8  Life motto ?
Believe and never be afraid because Light will eventually prevail. Laziness is your only true enemy.

#9  You define yourself as ...
As a person who has a dream and that dream will be achieved without having to lie or harm others.

#10  A book?
Unfortunately I don’t like to read, I like to develop my intellect in a more interactive way.

#12  Where do you buy your clothes ?
I don’t buy them. I make them myself with help from LIRFONS.
The only thing I was buying until now where shoes, but that’s a thing of the past as well, because we started designing shoes at LIRFONS as well.

#13  You don’t leave your home without …
Leaving a message to my girlfriend saying that I love her.

#14  A fad?
I guess my fad is that I believe in goodness and that there is more of it than evil. Even though most of the time it’s the other way around, I still believe.

#15  In the future, where you imagine yourself ? Doing what ?
I imagine myself together with my girlfriend; we’ve finally found a place we call home.
I am still designing for LIRFONS, still playing music. I imagine myself as an actor and I would love to help other people to develop their talents and skills. And of course I would like to be able to bring a little bit of love, light, happiness and beauty to this world, make it a bit better, a bit brighter.